Is ‘Pokémon Go’ the New Marketing Wand for Businesses?

You are here: Home / Is ‘Pokémon Go’ the New Marketing Wand for Businesses?
Posted On: Aug 04, 2016
Posted By: John Duff
Share This: 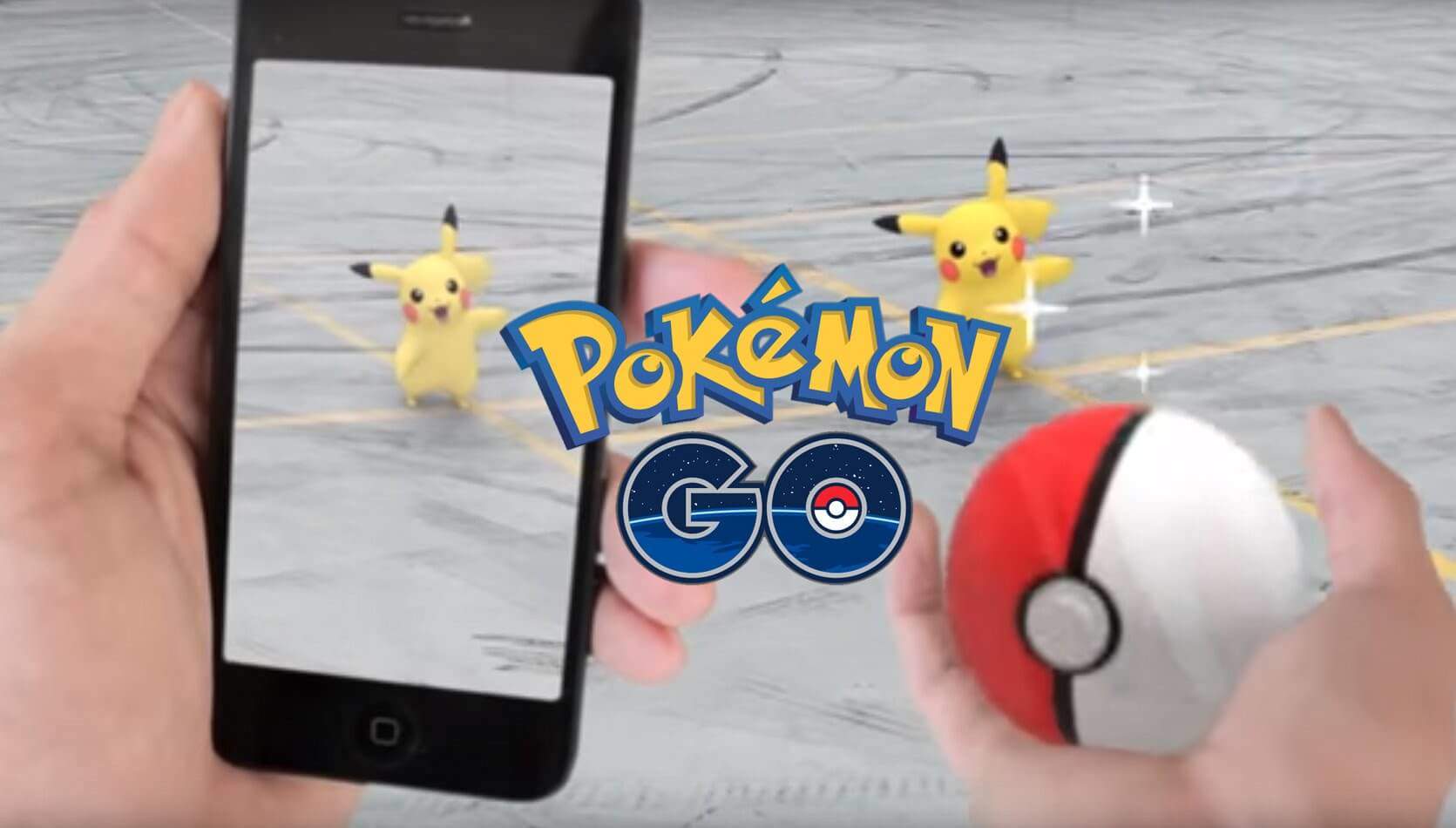 In the late 90’s when we were introduced to the Pokémon, we became so addicted that our parents used to tell us to stop playing it all day in our homes and go play outdoor games. Today after 20 years, Pokémon is making us go out and explore local neighbourhoods, cities, parks and public spaces, some of which we never knew exist. There are chances that you have been living in the Himalayas if you have not heard about the latest craze taking over the world – Pokémon Go.

If you are still unaware of what the fuss is all about, Pokémon Go is an AR (Augmented Reality) game from Nintendo that you can play on your smart phones. Ever since its release in July 2016, the game has been downloaded over 100 million times and millions of people are out on the streets to catch Pokémon.

What makes Pokémon Go different from other games is that it combines the virtual gaming experience with real life locations. Players can find, Lure and catch Pokémon, guided by the locations suggested by the gaming application. Their mobile devices vibrate when they come closer to different Pokémon creatures which they can catch throwing a Pokéball. The ultimate objective is to catch all 150 virtual Pokémon creatures.

Noticeably, Pokémon Go has been creating surprising experiences and interactions, and various businesses have started seeing it as an appealing marketing tool to attract potential customers and boost up sales. If you are one of those seeking to explore this opportunity, here are four ways you can use Pokémon Go to promote your business and bring you more customers.

SoLoMo (Social Local Mobile) is the latest buzzword in the marketing world, which can be realized in a true sense using Pokémon Go since it allows people to interact in the social media and real world simultaneously. Businesses may use Pokémon Go to their advantage and unlock big gains in sales from extra foot traffics. 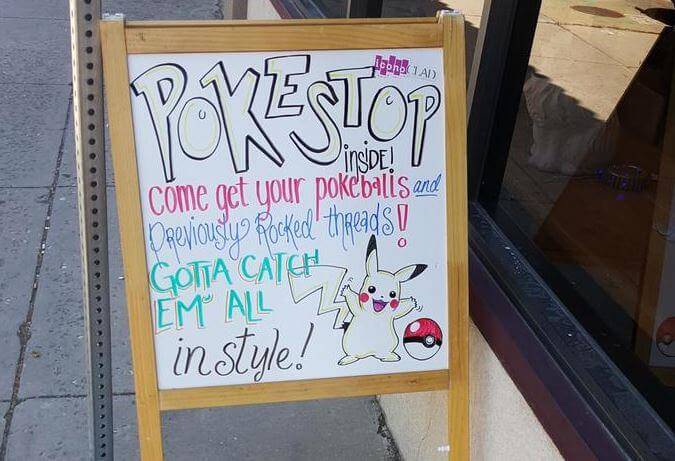 For instance, a clothing store in Utah realized its shop was actually a Pokéstop and it immediately posted a sign outside the shop saying “Gotta catch ‘em all, in style,” and shared pictures of the sign on social media. Soon after this, the store was able to attract extra customers and the picture also found a place on Forbes and Money, giving them more than expected promotion. 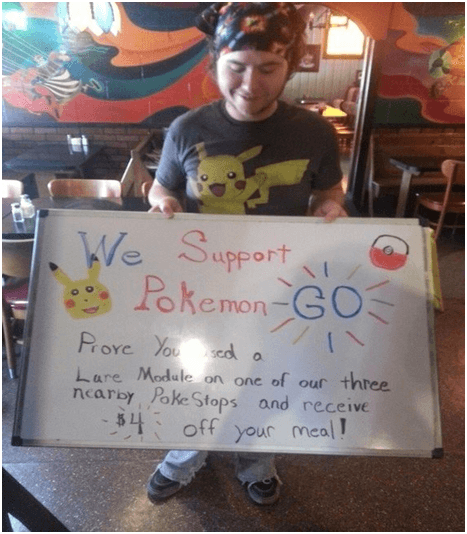 Alike Individual players who can set Lures to catch Pokémon, businesses can also place Lures and get 30 minutes of Pokémon gathering for about 3$. They may set eight hours of Lure models for less than 25$, which I believe is a perfect idea when it comes to cost effective marketing. Also, businesses must make sure to let people know that they have the Lures set up by posting on social media or placing a signboard with an enticing invitation. Alternatively, businesses can encourage offering their customers various rewards such as a free beverage or discount on a meal for using one of their own Lures.

3. Encourage Customers to Take pictures of Pokémon caught in Your Store 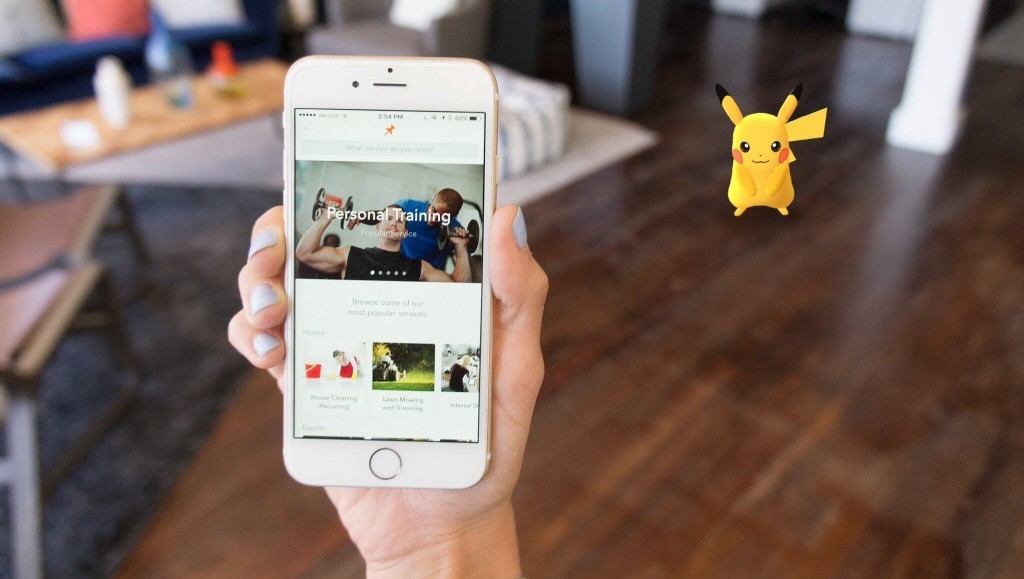 One of the other ways of promoting your business on the social media using Pokémon Go is to encourage customers to click pictures of the Pokémon caught in your store and post it on social networking sites in exchange of certain freebies or discounts. However, businesses should make certain that the customers tag them in the posts and mention their stores’ names. In case you just wish your existing and potential customers to make a purchase from your store, you may offer a special discount (say 15%) for Pokémon Go players for a limited time and request them to check in while shopping from your store.

If your business already has a strong social media presence, you may host a Pokémon Hunt competition and let your followers know about it. You may offer special discounts or gifts for customers who find rare Pokémons at your premises. This strategy could produce great results when you have a certain product or service to promote, or increase brand recognition. 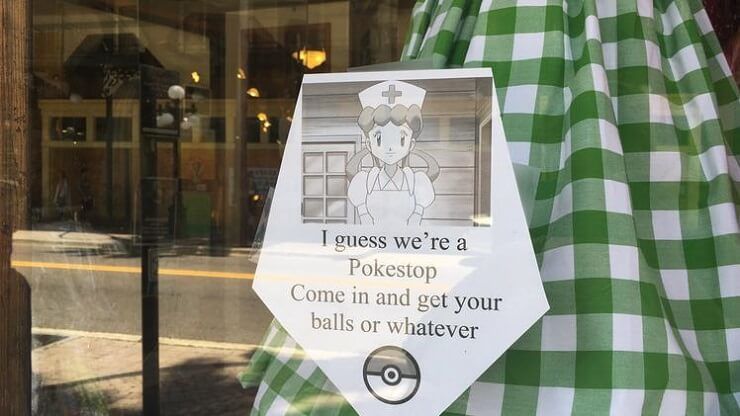 Other than the above mentioned options, a business may explore many such ways to make the best out of Pokémon Go, which is seemingly one of the most exciting marketing techniques we have witnessed in recent years.